Bouncing Down The Road 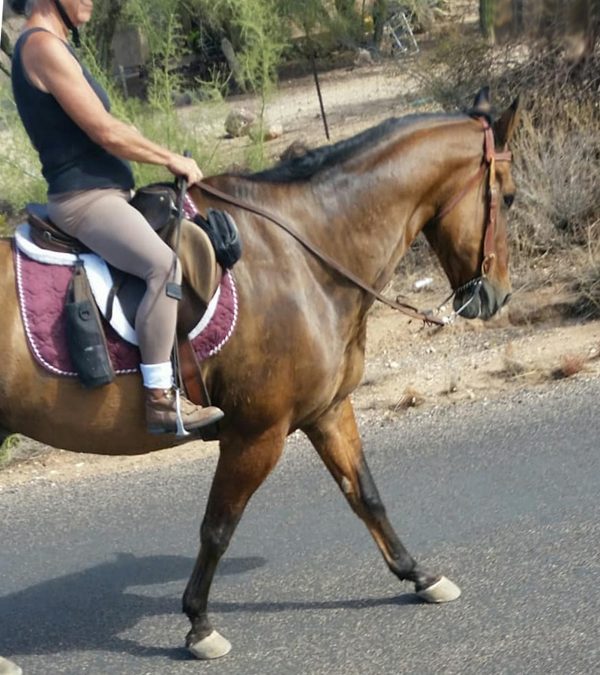 Have no idea how a friend & I got around to the subject of finding the right bra for riding. She has an ample bosom, and her shoulders were aching about a half hour into one of our rides.   I wear a D cup, and until I discovered the joys of a “no bounce bra” was miserable too.  I was happy to share what I had learned way back when I did a lot of volunteering for the Ramona Trails Pony Club.

The problem of too much up front?  Shoulder, neck & chest pain was my riding reality.  Posture was difficult to maintain & slumping in the saddle to avoid bounce is NOT a style a rider should develop.   The thought of trotting, let alone a nice canter, with endowment flopping  just that little half second behind the rest of your body moves, slamming you in the chin & chest, was a nightmare.  When I was riding my half arab, who could keep up that bone jarring little jog for miles, I was in misery.  I would do anything to get my mare to simply walk – mainly, to end the nonstop bounce up front.   No matter the horse I rode, it got so bad that I found myself seriously avoiding some rides, because of the bounce factor.

Let’s face it – with age, a bosom sags.  Gravity pulls the tissues towards the ground as skin loses its elasticity.  Woman with larger breasts get to enjoy the pull of gravity more than women with smaller endowment.  But with time, the sag effect happens to all of us.  If you figure an average C cup breast weighs anywhere from 2 to 5 lbs, and a D or above cup weighs more, imagine a couple of 5 lb. sacs of sugar attached to your chest.  If you had to transport them while on a horse, you’d want to put them in a saddle bag, for heaven’s sake! For Old Gray Mare riders, finding VERY supportive bras is a necessity!

The experts tell us that a good sport bra minimizes breast movement in one of two ways: By compression, where the breasts are held against the chest to limit motion; or encapsulation, in which the bra surrounds & supports the breasts. Some bras uses both techniques and if you want to eliminate bounce when you ride?  Find a bra that does both! Super supportive sports bras are my best friends. Strapping into one is like putting on armor, but well worth the effort.  Once on, it’s ON and absolutely NOTHING bounces.

The “cons” of such supportive bras is that they tend to be well-built and aren’t as open as a standard bra so on a hot day, perspiration can be a problem.  However, the well-built models are made from fabrics that really do keep perspiration and chafing at a minimum.  Overall?  I prefer coming home from a ride a little damp in the front & pain-free with optimal support vs. the alternative.

Some of these bras are on the pricy side, but bargain savvy women can ALWAYS find a deal.  One thing I did – bought 6 of the bras when I found a GREAT sale on them and use them ONLY when riding.  Yes, I take special care of them.  My half-dozen friends are still working just fine & I’ve had them for years.

As for my friend?  She went shopping and found a super supportive sports bra that really worked for her. She’s now a happy camper & riding more these days too.